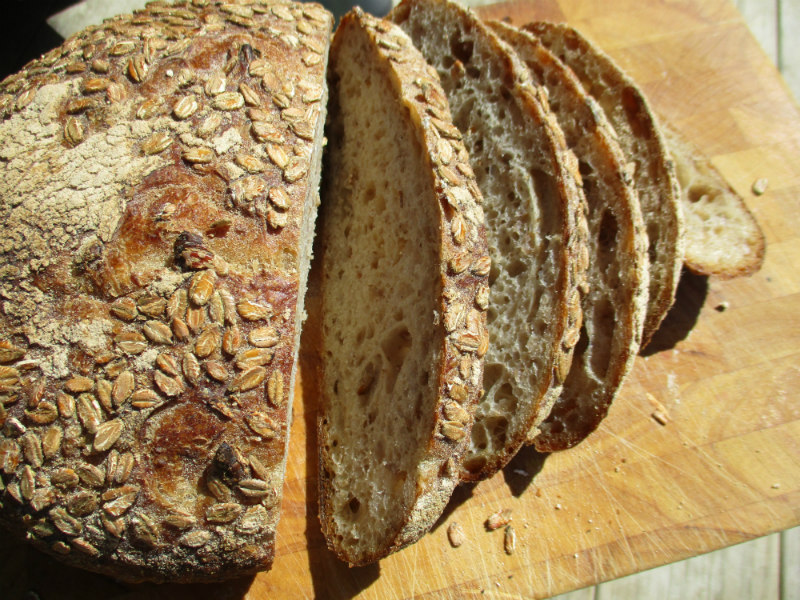 As the weather gets warmer, the days get longer and we start inching towards the BBQ again, the bakers have reinvigorated a monthly loaf to match those pre-dinner platters.

Rye is a grain from the same family as wheat and barley.  With a heartier taste it has been traditionally associated with peasants and considered the poor cousin of the grain world.  Rye grain looks like wheat but is longer and more slender.  Rye is available in its whole-berry or cracked grain form, or as flour or flakes. Since it is laborious to completely separate the germ and bran from the endosperm of rye, rye flour usually keeps more nutrients than its wheat cousin. Since rye’s gluten is less elastic and it holds less gas than that of wheat during the leavening process, breads made with rye flour become more compact and dense.

Why is rye good for you?

Rye promotes weight control.  It suppresses hunger, improves digestive health and protects against colon cancer.  It helps control blood sugar and regulates the appetite as well as reducing blood pressure and the risk of heart disease.   Rye is high in iron, calcium, potassium and zinc ad as well as vitamins B3 and E.

A common question from bread customers is: which of your breads has rye in it?

We use rye flour in many of our loaves at Wild Wheat: it plays a small role in the Seeded, Potato and the Kumara Sourdoughs and is more prominent in the Caraway and Country Sourdoughs (which both include ryemeal as well as flour).  On Saturdays we do a Rye & Sultana Loaf as well as a Sourdough Miche, both with rye flour.  And when you want to go really Germanic there’s the Heavy Rye loaf too.

The October Special is a tasty alternative to those looking for a rye option but with the added addition of smoked oil for extra flavour.

Touted by American Health Magazine as a ‘pantry essential’, smoked oil is a variation on other flavoured oils which have been so popular in groceries for a number of years now.  We use a local smoked oil, made with a base of sunflower oil which is smoked with liquid maple smoke and Manuka honey.  Sunflower oil is higher in polyunsaturated fats than olive oil – compare 65% with just 10% – and higher in Vitamin E too.  Polyunsaturated fat goes above and beyond protecting your heart. It contains omega-3 and omega-6 fatty acids. These components reduce inflammation, support neurological communications and are essential for everyday growth and development.

The result is a plump, juicy, hearty loaf with a sweet, smoky flavour:  a worthy pairing with breakfast egg dishes of the savoury persuasion, with soups and stews and also as an accompaniment to tasty cheeses and cured meats.  Lightly toasting it will release more of the taste and aroma of the smoked oil; it also gives you a good excuse to lather on some melted butter.

Wild Wheat’s October Special comes in a round 800g loaf.  However, due to the presence of Manuka honey in the smoked oil, vegans are best to avoid it, as are the gluten-free.