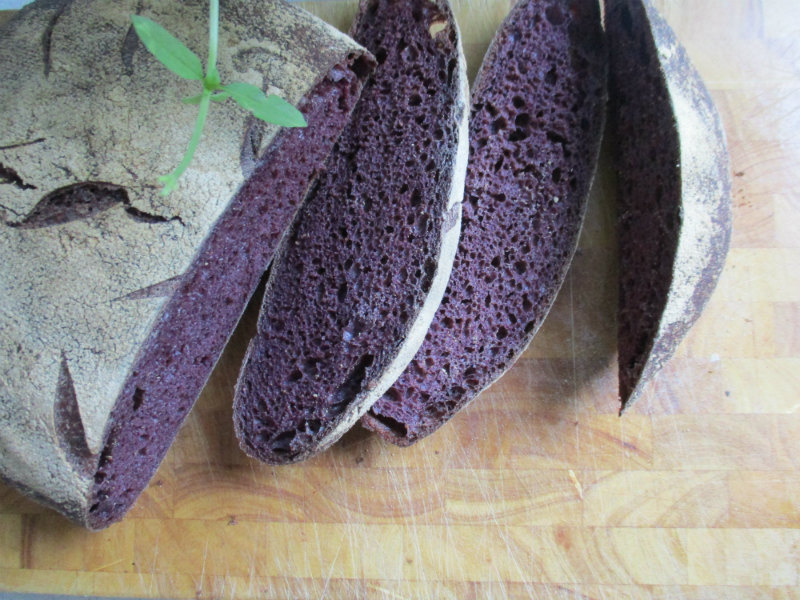 I certainly wasn’t prepared for the colour of the May Special when it appeared a couple of weeks ago.

Perhaps it was the bewildered look?  Perhaps he was just short on time?  But the cook’s advice:  ‘Google it.  It’s good for you’.

So I googled it.  And what do you know?  It’s good for you.  In fact, purple corn is another touted super food with a super long history and a very vibrant profile to boot.

Why is corn good for you?

According to the USDA National Nutrient Database, corn not only provides the necessary calories for healthy, daily metabolism but it is also a rich source of vitamin A, B, and E.  It is high in dietary fibre and the its antioxidants present also act as anti-carcinogenic agents and prevent Alzheimer’s disease.

So what’s the story with purple corn?

I’m familiar with a whole lot of purple vege so I’m at a loss to explain how purple corn just didn’t figure.  I mean, red onions (which are, let’s face it, purple), red cabbage (also purple), purple carrots, purple asparagus and purple cauliflower.  These are the ones that come to mind.

You may have seen purple corn centerpieces or displays but not realised how seriously you can take this unusually coloured vegetable.  It has health and nutritional benefits which are not to be sniffed at.

Purple corn is jostling for position among the list of nature’s new super foods and boasts twice the number of antioxidants as you find in blueberries.

Purple corn dates back more than 2,000 years where it was a popular food staple in ancient civilisations such as the Mayans, Incas and Aztec.  Nowadays purple corn is widely grown in South America – primarily in Peru, Ecuador, Bolivia and Argentina.  Also known as Purple maize, purple corn is botanically identical to the sweet corn with which we are most familiar, but appears deep purple colour due to its high phenolic content and anthocyanins. Research suggests that purple corn is one of nature’s richest sources of health-enhancing anthocyanins and polyphenols.

Anthocyanins are water-soluble plant pigments responsible for the blue, purple, and red colour of many plant tissues. Anthocyanins are believed to play a major role in both plant pollination and seed dispersal.  Additionally, anthocyanins have been shown to be one of nature’s strongest antioxidants, offering an array of health benefits. Think: good for your heart, good for your brain and good for your immune system. North American Indians, Europeans and the Chinese all used anthocyanins in traditional herbal medicines.

According to the Journal of Medicinal Food, scientists in São Paulo, Brazil studied ten traditional foods native to the Peruvean Andes, to measure healthy compounds in these foods.  They found that purple corn scored highest in free-radical-scavenging antioxidant activity. The researchers concluded that these native foods, including purple corn, could be useful in designing health-management programs for diabetes and hypertension.

So what about this loaf?

Both the colour and the texture of the Purple Corn Sourdough are amazing.  It has a moist, spongey, purple crumb which contrasts with the darker, chewy crust.

If avocados weren’t so expensive at the moment, I’d be mashing them all over thick slices of toast with salt, pepper & shredded basil.

Perhaps some homemade parsley & red onion pesto, layered with sliced tomato, will have to suffice?  It’s good for you, you know.