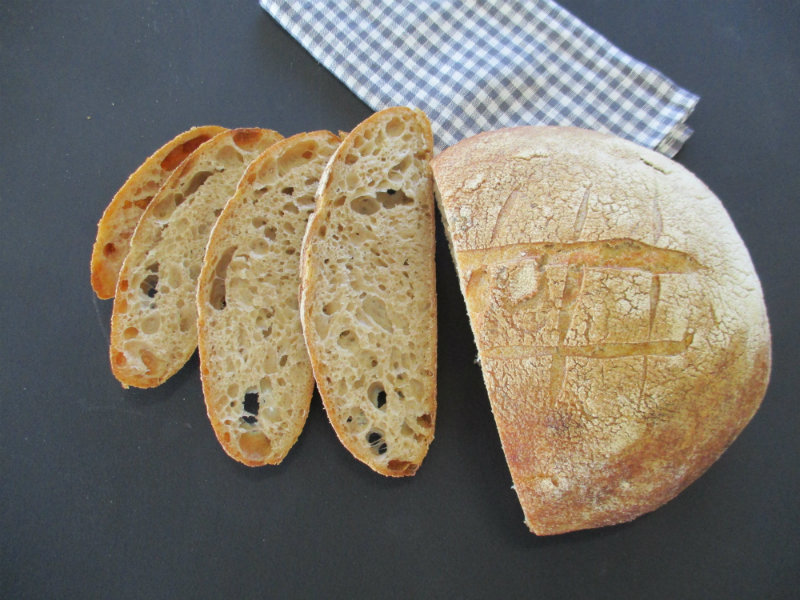 One of the many perks of my job (the tasting of new products being a big plus) is the education that so many of these new items offers me.

Back in 2011 when our first monthly special appeared, Spelt wasn’t a widely used wheat in the Auckland bread scene.  Sprouted grain was not a common practice and nor did commercial bakeries use local products to flavour their loaves.

Andrew likes to explore the likes of kawakawa, kaniwa and horopito in his dough just as much as the on trend superfoods and ancient grains.  And each time he brings in a new ingredient, I’m off the library, the supplier and the internet to find out all that I can.

In the case of this month’s special, Khorasan is nothing new.  In fact, it’s very old.

The story of Khorasan

Khorasan (kor-raa-son) has already featured in a monthly special back in 2016 but as Kamut.  Kamut is a branded version of Khorasan wheat grown in the US.  Khorasan was once a large region in what is now Iran, Afghanistan and other parts of central Asia;  it is believed that this grain was first cultivated there.

Khorasan wheat is a lot like emmer, farro, einkorn, and spelt; it’s an ancient variety of wheat, meaning that it has been largely unchanged by breeding over the last several hundred years.

The kernel of Khorasan wheat is unusually large compared to other wheat varieties.  Khorasan also boasts a sweet, nutty, buttery ﬂavour.  As with spelt, einkorn and emmer, it is reported that some people who are sensitive to conventional wheat can better tolerate Khorasan wheat.  As with Spelt, some people find that this ancient wheat variety seems easier to digest, causing less gastrointestinal distress or inﬂammation than typically experienced with wheat products.

Khorasan is 20-40 percent higher in protein than modern wheats and richer in healthy fats, vitamins and minerals than standard wheat.  Khorasan is high in fibre, iron and calcium as well as other trace minerals such as selenium, zinc and magnesium.

As part of a group of heirloom variety wheats, Khorasan contains sufficient gluten to make bread.  But the character of the gluten is more delicate than common wheats.  When fermented with a natural leaven over a long rise (as in our sourdough process), these breads are typically easier to digest than breads made with common wheats.  Khorasan has a naturally sweet flavour and being high in protein, it can take a lot of water.  This helps to achieve a lacy, open crumb in the loaf.

The verdict?  The April Special has a mild flavour, a good strength to it and a versatility so it can be paired with a range of meals and toppings.  This is a bread which will slot seamlessly into your routine – to keep on hand as you need – for breakfast, lunch, dinner and all the snacky moments in between.